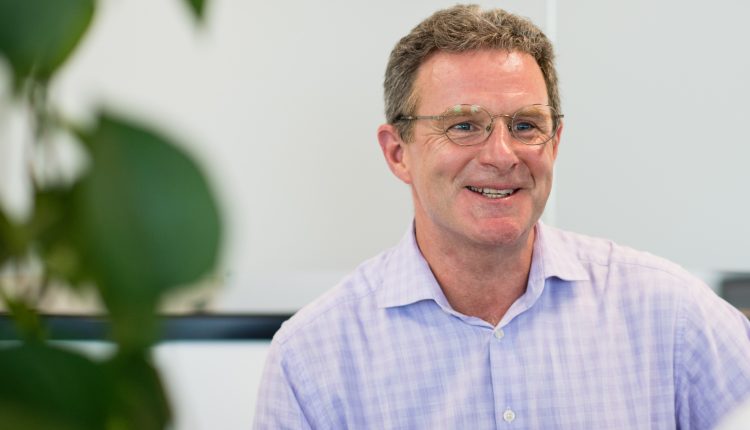 Tell us your story and what brought you to coaching?

My professional, and in part personal, story up to five years ago was that “unless I am a CEO of a multimillion or even billion $ company then I, and my career, are not a success”. This at times served me well and at other times did not. Now, my purpose is to be a ‘beacon for others’. I do this professionally by being in service to my clients, and personally by being a good human, a good husband, Dad and mate to my family and friends.

I left the corporate world of executive supply chain leadership five years ago, having been on executive teams leading supply chain and logistics functions in third-party logistics, retail, wholesale and FMCG in the UK and Australia. I was tired physiologically and mentally and I realised that my story of needing to be a CEO was not serving me well. I stepped away from executive leadership at the age of 51 and decided to take my life in another direction. What that was, I wasn’t sure – I knew it was not in a leadership position and not in consulting. I thought it could be in some form of coaching or mentoring, as that is something that was core to how I tried to lead – so I went to find out about a new world. After many cups of coffee, making new connections, building new relationships and hours of research into the world of coaching, I came across ontological coaching and that is where I took my first leap. In December 2019, after 18 months of learning and ‘going back to school’, I graduated from the world-renowned Newfield institute with a Graduate Diploma in Ontological Coaching and in parallel set out to become a credentialed coach with the International Coaching Federation, the gold standard in credentialed coaching globally. In January 2019, I was both a certified Ontological Coach and a Professionally Credentialed Coach by the ICF, with a growing client base and a message that was getting clearer.

Play that forward to June 2022, I have continued to grow my coaching practice serving C Suite leaders on a personal transformation journey both of leadership of self and leadership of others, along with supporting executives in career transition to find their next role and the ‘problem that they choose to be the solution to’. With regards to professional standards, in May 2022 I was re-credentialed with a Professional Certificate of Coaching (PCC) by the ICF, and in January 2022 I joined a Branch leadership team of the ICF in Australasia. In January 2021, I wrote and published a book about Trust, “Trust – begins and ends with self”. This has led me to speak publicly on this subject and work with executive teams in the domain of ‘collective trust’ within their team. It is a privilege to do the work that I do and serve the leaders I serve.

What does coaching mean to you?

Executive coaching is different to mentoring. In my view, it is something that you must be certified in by an accredited coach training school, as well as potentially being credentialed in from an internationally recognised credentialing body, like the ICF, to serve clients. It is an industry with an incredibly low barrier to entry (in fact no barrier to entry), which means that anyone can call themselves a coach. This is an issue for clients, for businesses who want to procure coaches, and for the credibility of the industry in terms of standards.

So, what is the distinction between mentoring and executive coaching? Mentoring is where ‘you have walked in the shoes of the person you are mentoring’. You have accumulated wisdom, knowledge, and experience to impart to the mentee through sharing stories and providing both insights and advice. You must be a learner, and ask questions to co-create an outcome, however, it is not necessarily a fixed programme with agreed objectives. Coaching, ultimately, is the ability to ask questions, to challenge thinking and feeling, be truly present, be an observer of others and a trained listener, to support the coachee to get to an outcome for themself, over an agreed programme where that person has set the objectives that matter to them. This should, in an enterprise sponsored programme, include the views of the sponsor (typically the line manager) to ensure alignment and a measurable ROI for the programme.

What are the key attributes of an excellent coaching programme?

There are different types of coaching, which does not help when trying to define what coaching is and what the key attributes are – for example, there is ‘business coaching’ (more akin to consulting and perhaps mentoring); there is ‘life coaching’ (“empowering people to achieve success in their personal or professional life”). This form of coaching still requires the type of competencies and qualifications outlined above and relies on asking questions; there is ‘career transition coaching’ (again, a hybrid of asking questions and sharing insights, where the coach has to have experience and hopefully certification in some form of coaching to support a person through a career transition journey). Then there is ‘executive coaching’, which for me is supporting a leader through a transformative journey of self, such that the person becomes a more effective leader of self, of the team, of their business and in society. I acknowledge that not all executive coaching is as deep or transformative as mine is, however, an executive coach must have the accredited coach training and experience in business to be able to empathise with the coachee, ask searching and challenging questions to support that person achieve the objectives that they create for themself.

In summary, coaching is unregulated and not clearly defined. My assertion is that executive coaching is about asking questions, not providing advice; it has a defined programme with objectives and a timeframe; it should only be conducted by a certified coach from an accredited training provider, who ideally is credentialed and has a coach mentor/supervisor; the coach must have the appropriate business experience and references to serve the coachee to achieve their self-created objectives of their programme – and of course provide value through an agreed ROI!

What makes your coaching programmes effective?

They are transformational for those who choose to work with me. They are transformational in the way in which a client sees self and becomes more self-aware – their ‘way of being’; in how a client uses language to build relationships, effect change and deliver outcomes; in how a client behaves and takes purposeful action so that those who choose to follow them are empowered, guided and feel safe to achieve what they set out to do, both for self, team, business and in society. This is in the domain of their ‘way of doing’.

To explain at a deeper level why my programmes are effective, I make the distinction between a client’s ‘way of being’ and their ‘way of doing’: 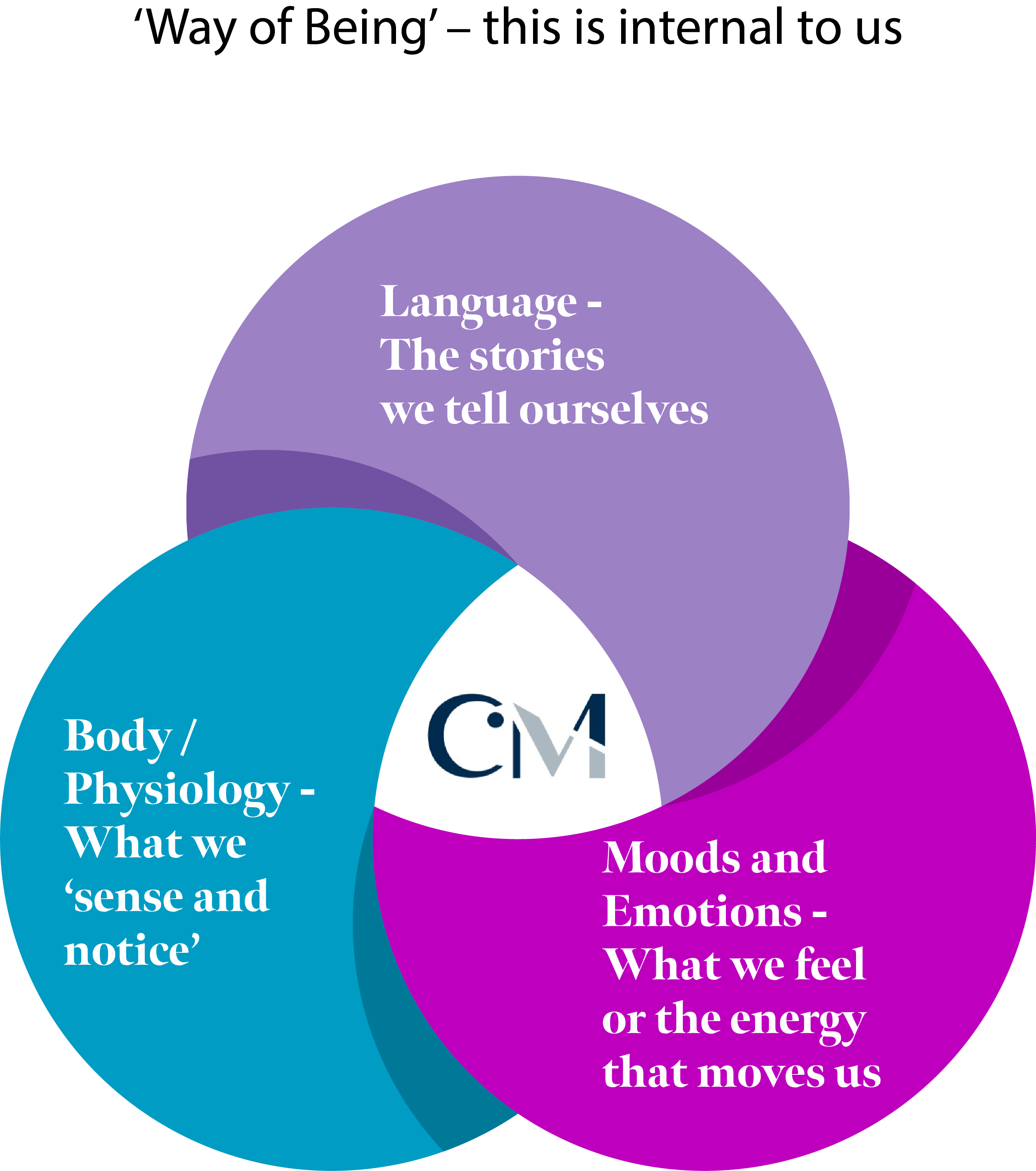 By observing our ‘way of being’ in these three domains we will become far more open to the possibilities of using effective audible language to build relationships and get things done; how to behave and what actions to take that enable us to be a ‘better’ person and a ‘better’ leader of self, of others and in society.

That is why my coaching, and life philosophy, is: Observe|Choose|Act.

How is leadership changing?

The barometer is a global measure of people’s faith in companies, governments, the media and non-government organisations and in this year’s survey it shares that, “at 61% business is the most trusted institution”.

This is one of the two key elements of how leadership is changing – leaders must be more leaders in society, as well as of team and their business than was ever required before, as trust in the classic institutions of state, media, and church decline. More socially conscious employees expect their leaders to take a lead on social issues now, as the Disney Company found out earlier this year when staying quiet on the new legislation in the US that “restricts classroom instruction on sexual orientation and gender identity” when employees walked out on the job, based on the company not taking a stance.

However, providing an opinion with a societal theme can also be very risky if not well thought out, aligned with corporate policy and in keeping with the public mood, as Stuart Kirk of HSBC found out recently when accusing “central bankers and policymakers of overstating the financial risks of climate change in an attempt to “out-hyperbole the next guy”. The result of this statement being a public rebuke from the head of HSBC’s wealth and personal banking business, Nuno Matos, as he shared that Kirk’s views “are inconsistent with HSBC’s strategy and do not reflect the views of the senior leadership of HSBC or HSBC Asset Management.”

The second way that leadership is changing is more empowered women in general, and more women in ‘C Suite’ roles (however still not enough) driving a different style; the millennial generation looking for a different style of leadership to the traditional ego fuelled ‘my way or the highway’ and ‘I have to know it all’ approach and minority groups in business rightly demanding more inclusion of their views and concerns. Not only for the ‘fact’ that leadership is changing, but it also needs a different approach because in today’s data-driven and more complex business landscape the leaders’ role is being expanded into areas not previously demanded of them.

Leaders have to adapt to their roles being expanded in scope with more ambiguity in business today, as well as take their teams on a journey of trust, as opposed to believing they will be trusted as the leader because of their position in the company. This, combined with more working from home and the traditional hierarchical structure in organisations changing to a more agile nature, executives must be more self-aware and use skills that emphasise effective listening, empathy, curiosity, awareness of emotions (both of self and others), relationship building and co-creation of outcomes to augment the more traditional leadership skills of visioning and decision-making. They must be able to ask not only, “what you do you think?” But “how are you feeling?” and have the competency in the domain of emotional awareness and literacy (not intelligence) to deal with the response to that question.

As Nicholas Janni, a world-leading executive coach, and author, shares about the changing nature of leadership: “To survive and thrive they must include yet transcend mindsets and capacities that, while once very effective, now contribute to the problem.”

What role does executive coaching have to play in this?

Well done, executive coaching is an enabler for leaders to make a shift in their ‘way of being’ and their ‘way of doing’ to meet the changing expectations of those they seek to lead, and the environment that they lead in, to deliver sustainable results.

As I shared in the Australian Financial Review in March 2021, which still holds ‘true’: “Executive coaching supports leaders to make sustainable and conscious changes and to be more effective, not just for their own company and team, but for society as a whole.”

As ‘the CEO’s Caddy’, I walk alongside my clients supporting them in this endeavour by observing them, challenging them, asking questions of them, being there for them, and ultimately celebrating with them as they make a difference in the world for others.

This article was first used on the CEO Today and has been posted with express permission.

Conor O’Malley is an executive coach who works one on one with CEOs, directors and executives. You can find out more about him here.

♦ To subscribe here for our Coach Yourself Newsletter, see here

♦ To apply for accreditation your professional status, see here